Surprisingly, Iran is not completely flat or desert land. 55 percent of Iran is mountainous and more than 100 peaks are higher than 4000 meters. Iran’s mountains are divided into four groups: Alborz range in the north, Zagros chain in the west, Eastern Mountains, and central ones. There are some volcanic peaks like Damavand, Sabalan, Taftan and etc. strange caves and springs and spas have given more beauty to the mountains.

It’s good to know that evidence of early communities and urban settlements have been found in the Zagros mountains. Therefore, picturesque nature and also the cultural and historical attraction of Iranian mountains are considerable. The following table shows the twenty highest of Iran’s mountains. It’s a brief list and lots of mountains can be added to it. By the way Kuh in the Persian means mountain. 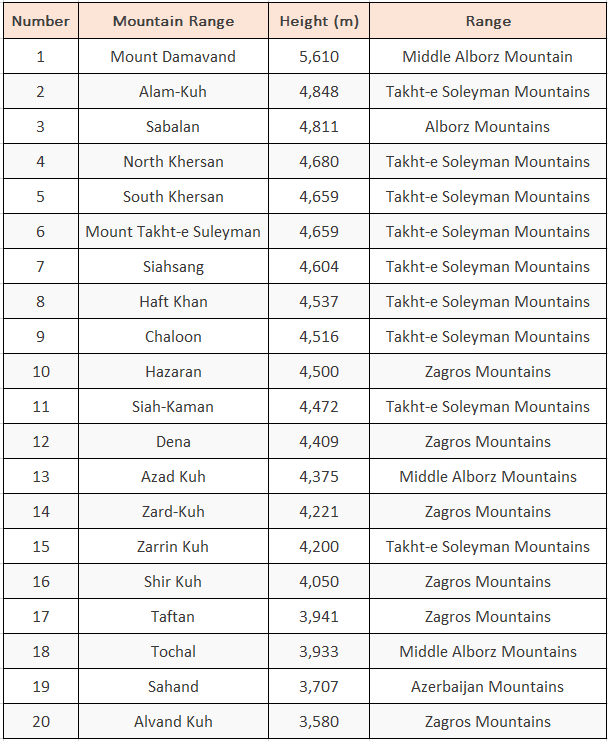 Now it’s time to introduce the most visited ones:

Damavand is located in the Middle of Alborz range, in the South of Mazandaran. It is 5610 meters high and is the highest peak among Iran’s mountains and the second conical peak after Fiji in Japan.

This mountain is a symbol of strength, pride, and glory in Iranian culture. Iranian poets use the word ‘’Damavand” in their poems when they want to talk about persistence and fighting against the enemy.

It is one of the most beautiful mountainous regions in Iran. Alam-Kuh peak, which is 4848 meters in height is the second highest point of Iran after Damavand. Alam-Kuh is located in Mazandaran province and it is like a paradise for those who are interested in Flowers, plants, and also gardening.

So different plant tours are held there in Alam-Kuh every year in spring. It is a famous mountain and its reputation is due to the hardness of climbing. Its northern wall is a difficult and technical route for climbing.

Sabalan Mountain which is 4811 meters, is the third-highest and the most extended volcano between Iran’s mountains in Ardabil province. Thermal and mineral springs are attracting local people as much as visitors.

Tourists travel to Sabalan city to Dive into hot spas and get rid of their illnesses which suffer them. In the other words, it’s warm sulfur springs possess great healing power, especially against skin diseases.

The mountain is known for its beautiful landscape and is one of the important sacred mountains. According to some beliefs, Mount Sabalan was where Zoroaster meditated for some years, so Sabalan is a sacred place in Zoroastrianism. Shah Savan nomad lives around Sabalan in summer. Based on nomadic beliefs, when all the snows melt, the world will be destroyed.

Takht-e Soleyman means Solomon’s Throne (seat). According to local legends, Solomon asked Belgheis (It is an old name for girls in Iran) to marry him. Belgheis said that Solomon should build the tallest castle in the coldest region for her to accept becoming her wife. Solomon, who could speak to animals asked them to go and search for the coldest spot.

That night all the animals came back except Hodhod (name of a bird in Persian). In the morning Hodhod returned and said I found a place that was too cold. My wings frizzed last night because of its cold weather. So I had to stay there until morning and wait for the sun. Therefore Solomon chooses there as the tallest and coolest place and builds a castle. Takht-e Soleyman is a very rugged peak and its slopes cover by cliffs/needles. So if you are interested in climbing you should experience Takht-e Soleyman.

Azad Kuh with 4375 meters height is a giant rocky summit that rises from the south of central Alborz Mountains. The eastern, northern and western slopes of Azad Kuh are made of steep rocks with more than 500 meters tall. In summer, the weather is generally clear, and isolated thunderstorms do occur. At the weekends you can see so many climbers that are going to Azadkuh. Therefore, if you are interested to enjoy the scenery besides experiencing climbing you can join them easily.

Zardkuh Bakhtiari is a mountainous area in the northwestern Zagros chain, which is located in the southwest of Iran. It is funny for you to know that ‘’Zard” in Persian means yellow. It is more than 4,221 meters above Dena Mountain and considered the second-highest mountain in the Zagros mountains.

This mountain is important in Iranian culture because it is somehow the home of Bakhtiari nomads. Iran is the main source of nomads in the world. Bakhtiari Nomad passes winters in the plains of eastern Khuzestan and summer in the western parts of Chaharmahal and Bakhtiari.

These people with their special traditions and lifestyles are one of the most remarkable attractions of this region. Ethical life and special traditions could be spectacular tourists and foreign and even domestic visitors. It is considered to be the most difficult nomadic way of the country.

Taftan is the only semi-active volcano between Iran’s mountains. Sulfur is always emitting from the three volcanic craters of this mountain. At the entrance to volcanic cavities, pure sulfur cliffs are abundant. If chemical substances of the Taftan volcanic peak mix with water, it can produce a dangerous toxic substance called sulfuric acid. This strange mountain is located in the southeastern part of Iran, in Khash in Sistan and Baluchestan Province.

Taftan with numerous peaks is the tallest mountain in Baluchistan. In Farsi, “Taft” means warmth, so this mountain that sometimes emits steam is called Taftan. Tourists who travel to Taftan for climbing have this opportunity to visit plenty of villages around and visited Petroglyphs on stones. When there is no line, people beautifully expressed their content. They carved a special piece of rock and transmitted their way of life and customs and special traditions to others.

The peak of Shir Kuh is a high peak (4050 meters) in the central part of Iran about 40 km south-west of Yazd. Shir Kuh and its neighborhood have a cold climate, although the region is placed in a hot semi-desert climate.

Therefore, it means that you can ski on snow and also enjoy walking on hot sands in deserts around in a single day. It is interesting for tourists to know that ‘’Shir’’ means lion in Persian, so Shir Kuh refers to a big and powerful mountain.

If you as a tourist want to reach the peak, you should start at 6 in the morning. After passing the villages you will see a high waterfall. It is a good place for breakfast and relaxation. Moving forward for about 4 or 5 hours leads you to the nearest track to the summit.

When you book with an account, you will be able to track your payment status, track the confirmation and you can also rate the tour after you finished the tour.
Sign Up

Or Continue As Guest